SmartDev Recognised as one of Vietnam’s Fastest Growing Businesses

It’s not every day a company gets to toot its own horn, and it’s rarer still when that horn is tooted by someone else. But tooted our horn is, as we beam with pride upon our recognition by SME100 as one of Vietnam’s fastest growing companies.

This recognition comes at an appropriate time of year, when many are recalling the things they are thankful for. Indeed, we at SmartDev have many things to be thankful for, both in and out of our organization.

The SME100 awards are given out yearly to companies across southeast Asia, including Singapore, Malaysia, Indonesia — and Vietnam, where SmartDev’s offshore development centre (ODC) is located. These awards are given to companies that are exceptionally resilient and show rapid growth, judged by a basket of qualitative and quantitative criteria. Winning such an award is something to be proud of, and we’re thrilled to join the ranks of other well-run companies in the region. 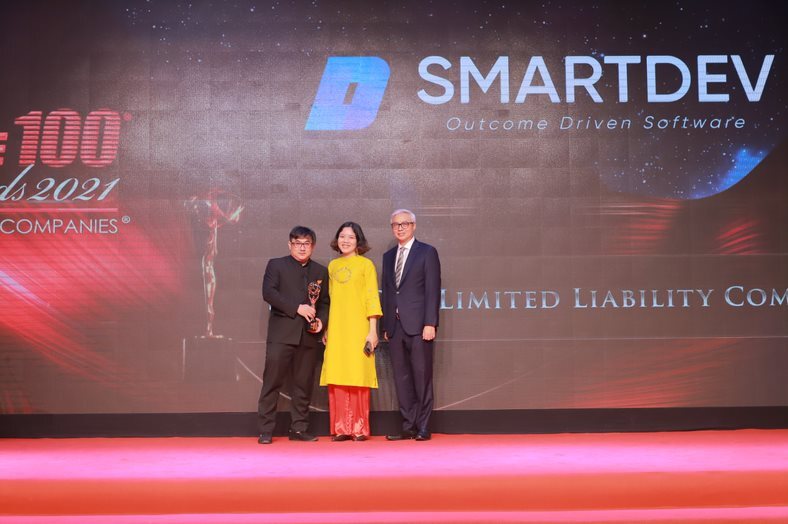 SmartDev proudly receives an award for being one of the fastest growing companies in Vietnam.

A Time for Thanks

Of course, a company is made of people, and those people have a purpose. For us, we’re thoroughly pleased to have been blessed with wonderful clients. There wouldn’t be a reason for SmartDev to exist without our clients — ensuring their success is our raison d’être. We’re especially proud when our clients give us referrals: That kind of endorsement doesn’t come easily.

We’ve got a solid team that forms the backbone of our company, as well as the heart, brain, lungs, and liver. Our colleagues make the company a fun place to be while cranking out great work, and we’re growing at a quick enough clip to be taking on new talent all the time. That’s a large part of the reason we won a “fast growing company award,” after all.

SmartDev would also like to thank our networks in all aspects for their referrals and for spreading the good word about our organization. Furthermore, and crucially, we have to give a large amount of credit and recognition to our Swiss parent company, VerySell, and in particular our Chair Mikhail Krasnov and Group CFO Petr Krasnov for their continued support and belief. 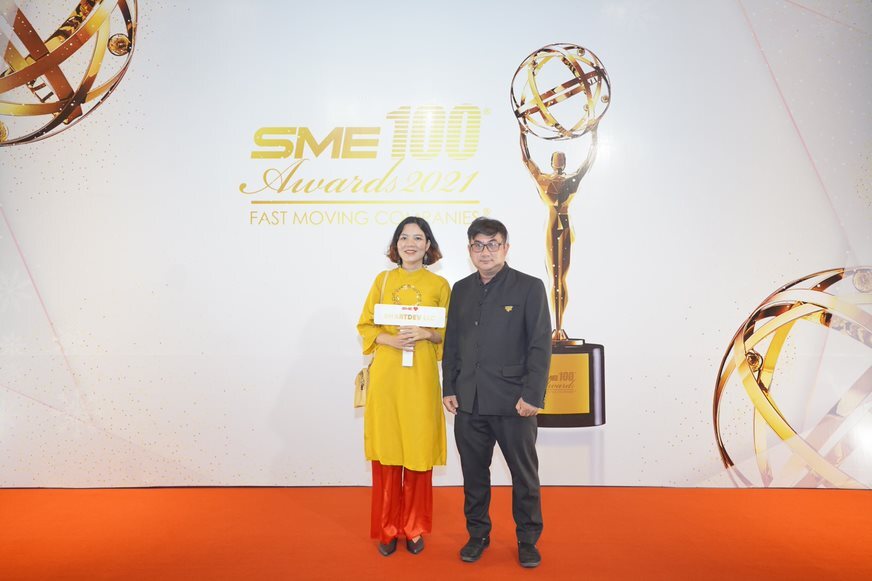 An Oscar? A Golden Globe? Whatever it is, we love getting trophies.

A Word from our CEO

SmartDev’s CEO is Alistair Copeland, a long-time tech guru and experienced leader in the tech world. If he could be here in person, he’d be the one receiving the award and giving a speech.

As he said, “Early in the year I conducted an interview with our now-COO, Nguyen Le. I asked him, ‘Why do you want to come back and work at SmartDev again?’ His answer was great: ‘I have unfinished business with SmartDev.’ He joined us and. together with Vincent Roye (General Director), Maxime Perniola (CTO), Luan Nguyen (Finance Director) and Tam Nguyen (HR Manager), became part of the leadership team at SmartDev.”

Mr. Copeland is quite optimistic about the company’s future and the general feel of the IT sector in Vietnam. As he put it, “I feel the same about Vietnam today as I did a decade and a half ago, having spent 15 years working in the IT sector. The excitement and energy is still as infectious as it was back in 2006. I look forward to the chance to go back. As my colleague Nguyen says, ‘I have unfinished business.’”

Unfinished business is indeed part of the message here, as we’re nowhere near done. As Winston Churchill once famously said, “This is not the beginning of the end. This is the end of the beginning.” 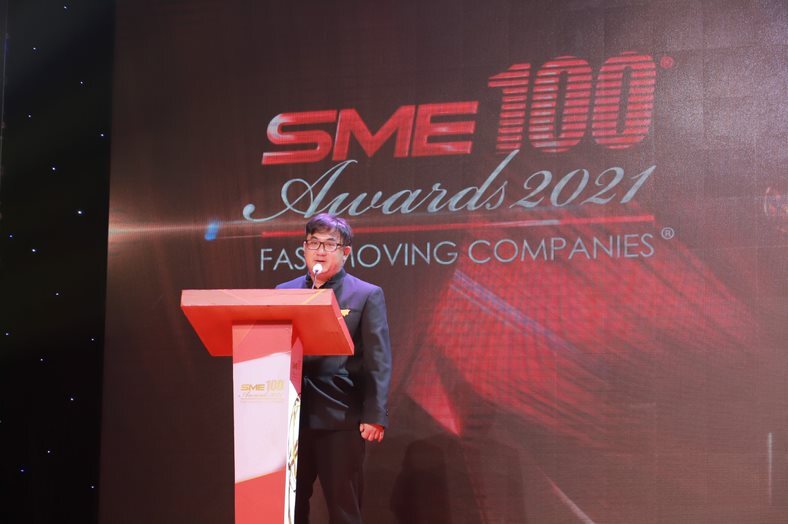 As the crowd clamored for a speech, we had to entertain them.

Looking Back on the Year

So, just what has happened this year? A lot, truth be told, but we’ll boil it down here to make it digestible for readers. Some key highlights include:

Combine that with a new and improved website, tons of new talent coming on board, and the grit to make it through what was a strange year worldwide, and we’ve indeed been quite busy — in a good way. 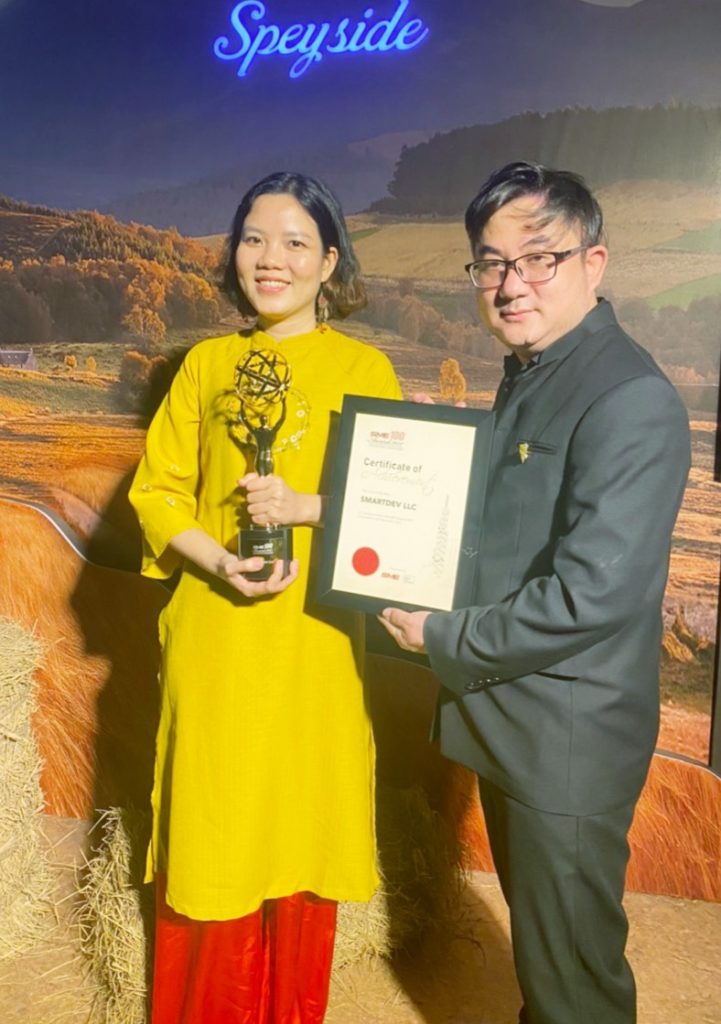 We were thrilled to receive such an honor from SME 100.

We’re certainly not sitting still, that’s for sure. SmartDev will be moving to a new office in February 2022 to house our growing staff and truly cement ourselves as a tech hub in the already-tech-hub of Da Nang. We have plenty of projects lined up that we’re thrilled to be working on and, with all the newcomers to our team, we expect plenty of fun and new personalities.

Certainly, we expect 2022 to be filled with hard work, more achievements, and hopefully more awards. We’ll have a blast doing it and getting there. Thanks for being here, even if reading this is the only interaction you’ve had with our company. We’d love to talk to you more. 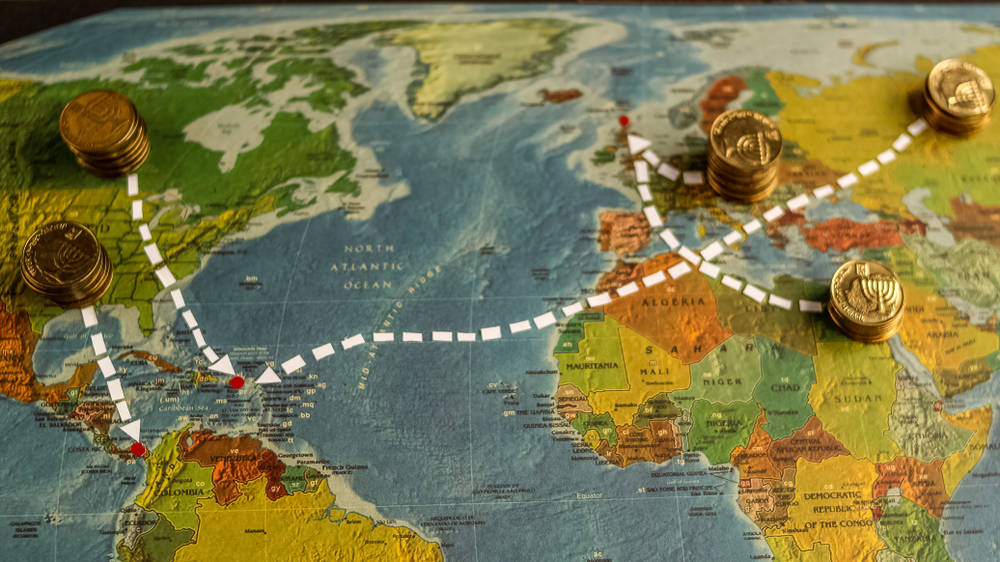 Nearshore vs Offshore: Clearing Things Up

Find out the differences between nearshore vs offshore outsourcing, and learn ways to navigate common hurdles. 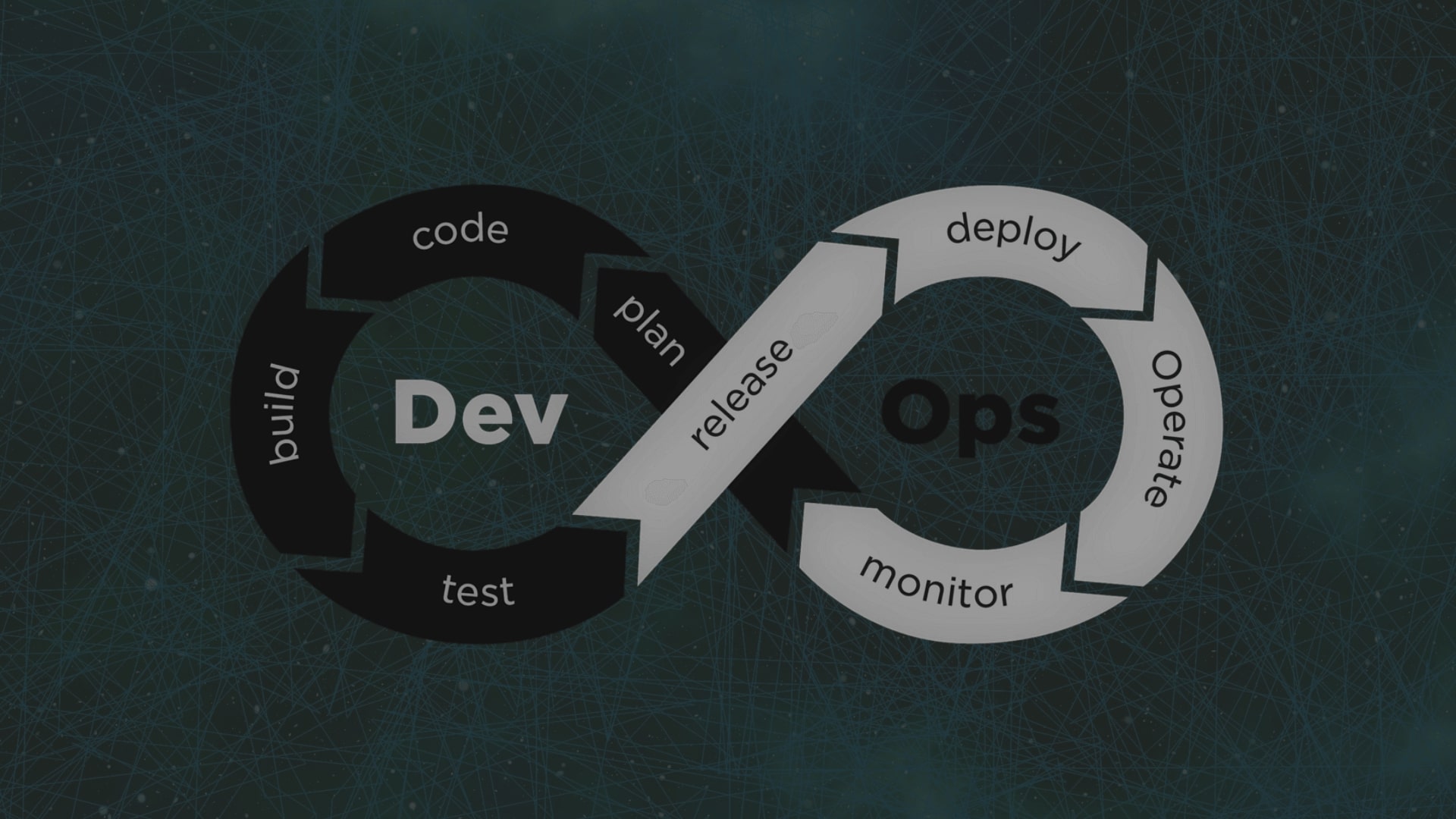 How DevOps Oils the Gears of Business

Modern business is constantly under pressure, and websites prove the rule more than the exception. This pressure transla(...) 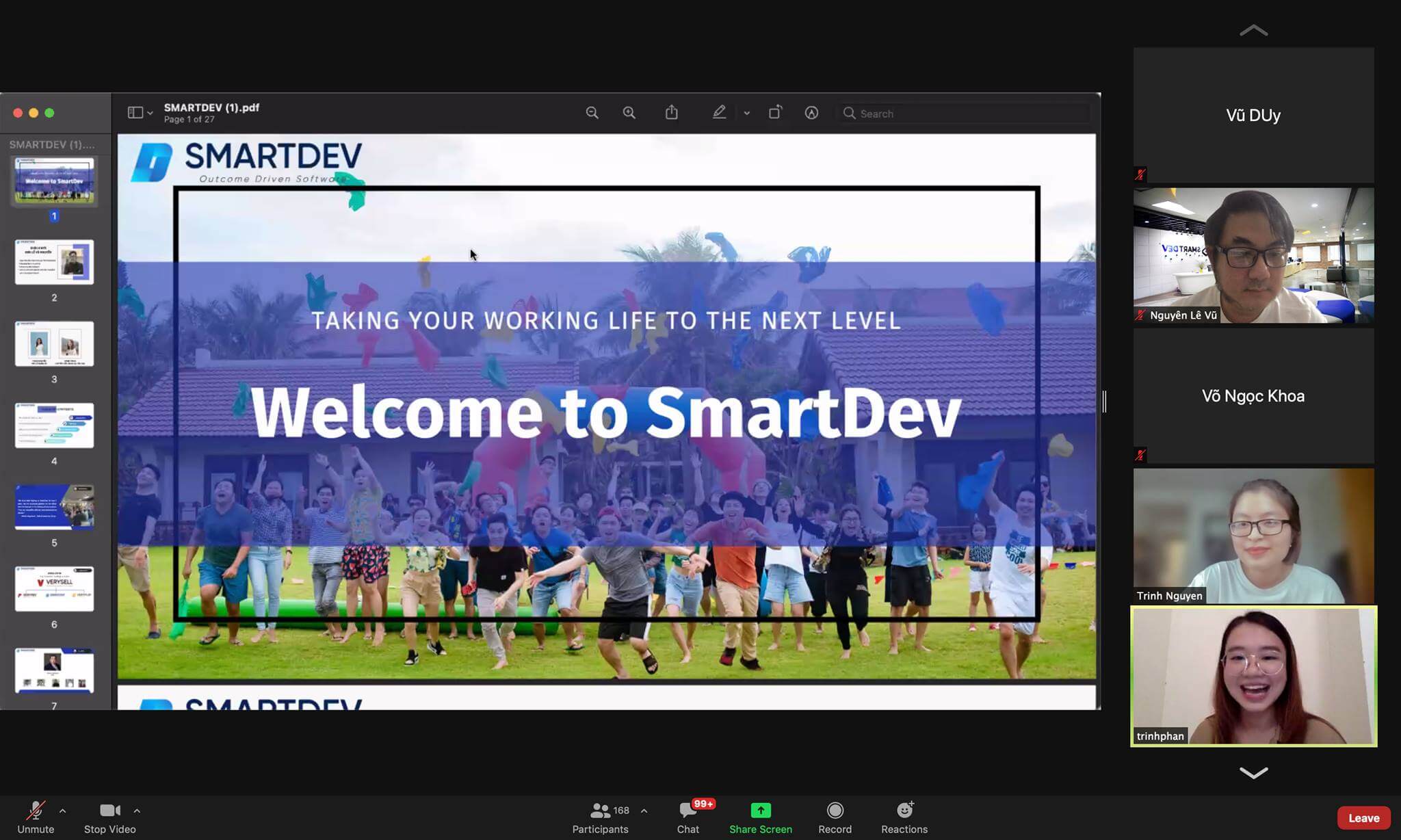 SmartDev believes in continuing the education and edification of our employees — that’s simply a wise business decis(...)